Famous LGBT Inventors and Their Inventions 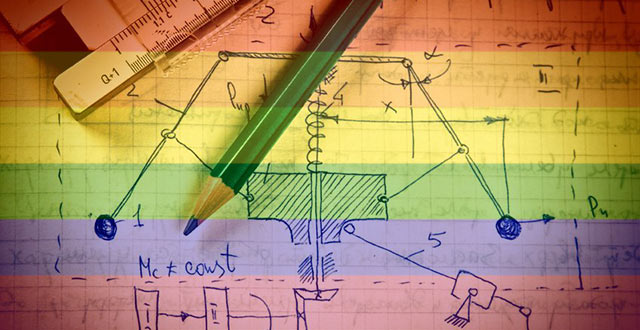 June is officially “LGBT Pride Month,” and it’s a perfect time to take a look at some of history’s most famous LGBT inventors. Not surprisingly, there have been countless inventors who have been a part of the LGBT community, and below is a list of some of the more well known.

Alan Turing was an English computer science, mathematician, cryptoanalyst and theoretical biologist who is widely considered the father of theoretical computer science and artificial intelligence. Simply put, you most likely wouldn’t have your PC if it wasn’t for this man.Aside from practically inventing the general purpose computer with is Turing machine, Alan Turing was an important cryptoanalyst for the British government during World War II. For a time he was the leader of Hut 8, the British code-breaking center that was responsible for German naval cryptoanalysis. His code-breaking skills played a pivotal role in intercepting coded German messages that allowed the Allies to win several major victories over the Nazis. Sadly, Turing was gay during a time when homosexuality was illegal in the United Kingdom. He was prosecuted for homosexual acts in 1952 and underwent chemical castration as an alternative to a prison sentence. Turing died shortly before his 42nd birthday in 1954 in what was ruled a suicide. He was finally pardoned for his “crimes” posthumously by Queen Elizabeth II in 2013.

John Burnside was an LGBT activist who promoted gay rights in the 1960s as a founding member of the Circle of Loving Companions, a group that helped organize one of the first gay rights parades in 1966 as a protest against the exclusion of gays in the military. He was also a founder of the Radical Faeries, a counter-culture movement that sought to redefine queer consciousness through spirituality. The reason why he is on this list is because he was one of the inventors of the teleidoscope, a type of kaleidoscope with an open view that forms patterns on objects outside of the instrument. It is in effect a combination of a telescope and a kaleidoscope. The teleidoscope was invented by Burnside with his partner Harry Hay and patented in 1972.

George Washington Carver was one of the most influential and groundbreaking agricultural scientists in American history. Dubbed as the “Black Leonardo” by TIME Magazine in 1941, Carver discovered several innovative uses for peanuts, clay and sweet potatoes. He was the first black student at Iowa State Agricultural College in 1891, and after graduating he became the only black faculty member at that school. In 1896 he was invited to head the agricultural department at the Tuskegee Institute, an all-black university founded by Booker T. Washington. He stayed in that position for 47 years.Relatively little is known about Carver’s personal life, although it is generally accepted that he was either gay or bisexual. He never married, and in fact was the constant companion of scientist Austin W. Curtis, Jr. from 1934 until his death in 1943.

Leonardo Da Vinci was one of the most important painters, mathematicians and inventors of the Italian Renaissance. Not only did he create some of the most famous works of art during that period such as “Mona Lisa” and “The Last Supper,” he also developed several inventions and concepts that seemed to be years ahead of their time. Some of the concepts that Da Vinci developed include an early helicopter, a 33-barreled cannon and even an armored car similar in concept to a modern tank.A limited amount of historical data is available about the personal life of Leonardo Da Vinci. Many of his writings and notes have survived to the present day, although most of those are sketches and notes related to his studies and inventions. His sexual orientation is a subject of debate, although he was accused of homosexual acts twice in 1476 and seemed to always be in the company of beautiful male proteges. It was generally accepted by the public that Da Vinci was gay after his death in 1519.Sources: